Diia City — What can business expect? Join us online!

July 2021 – In January 2021, the Ministry of Digital Transformation of Ukraine and Office of the National Investment Council began working on a set of draft laws aimed at the implementation of a special legal and tax regime for the IT industry ("Diia City"), including a new version of the draft Law of Ukraine No. 4303-d "On Stimulating the Development of the Digital Economy in Ukraine" and the draft Law of Ukraine No. 5376 "On Amending the Tax Code of Ukraine to Stimulate the Development of the Digital Economy in Ukraine". The above draft laws have been adopted by the parliament in the first reading and are being prepared for adoption in the second reading. As such, new rules of the game for the entire Ukrainian IT industry may very soon come into play.

In light of these exciting developments, Kinstellar, in cooperation with the National Investment Council, are inviting you to join the webinar, “Diia City — What can business expect?”. During the webinar, we will meet with Olga Magaletska, Head of the Office of the National Investment Council to discuss the most pressing issues related to the implementation of Diia City. Olga is one of the core developers of the Diia City legislative drafts and plays a key role in preparing them for the second reading. Considering that the texts of the draft laws prepared for the second reading have been substantially elaborated and are not yet available to the general public, we hope that our webinar will be a source of useful information for you on the eve of the final adoption of the Diia City legislation. 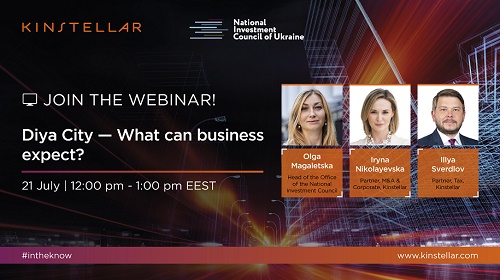