December 2020 – In November, the most important development in Turkish competition law news was the publication by the Turkish Competition Authority (“TCA”) of its draft “Communiqué on Commitment to be Submitted in Preliminary Investigations and Investigations for Contracts Restricting Competition, Concerted Actions and Decisions, and Abuse of Dominant Position'' (“Communiqué on Commitments”), details below. The TCA also published the online oral hearing dates for Biletix, a subsidiary of Ticketmaster, and the Turkish Pharmacists Association, both of which are scheduled for December.

Senior representatives of competition authorities within the Balkans and Middle East, academics and representatives of international organisations such as UNCTAD and OECD will be among the participants. The webinar is open for all to attend; registrations can be made here until 14 December 2020.

Legislation: The draft Communiqué on Commitments and first use of the commitment mechanism

The first use of the commitment mechanism in Turkey took place in November by the company Havaalanları Yer Hizmetleri A.Ş. (“Havaş”), which provides temporary storage services during customs procedures. Within the scope of an investigation carried out by the TCA to determine whether Havaş abused its dominant position, the company submitted a commitment to the TCA [1], which the TCA subsequently decided would eliminate its competition concerns. Thus, the investigation concerning Havaş was closed in less than a month after the commitments were submitted by the company on 5 November 2020.

While this decision is the first example of the successful use of the commitment mechanism in Turkey, it should be noted that the draft Communiqué on Commitments was submitted for public consultation on 27 November 2020. In order to benefit from the commitment mechanism, the undertaking subjected to a preliminary or an in-depth investigation should submit a written request to present a commitment to the TCA within three months after receiving the relevant investigation notification. Following the TCA’s receipt of the request to the "commitment negotiations" will begin which is similar to the "state-of-play meetings” process of the EC.

(i)  not to initiate an in-depth investigation by making the commitment binding on the applicant undertaking in the preliminary investigation, or

(ii) to end the on-going in-depth investigation that was initiated by making the commitment binding on the applicant undertaking in the investigation, or

(iii) to obtain the opinions of the complainant and third parties about the commitment.

If the TCA rejects the commitment, there are two decisions that might be taken:

(i)  the granting of a one-time option to make changes in the commitment within the time period to be determined by the TCA, or

The draft Communiqué on Commitments does not cover hard-core competition restrictions such as price fixing, market or customer allocations and restrictions of supply.

On 13 November 2020, the TCA finalised [2] its investigation conducted against Google and fined the company TRL 196.7 million TRL (approx. EUR 21 million) after ruling that Google was abusing its dominance in the general search services market.

The main allegations in the most recent decision were that Google hindered the activities of other undertakings by abusing its dominant position through its updates to general search services and unfairly using Adwords. The TCA ruled that Google had placed paid advertisements on top of search results not clearly carrying the characteristics of advertising.

In addition to the monetary fine, Google is obliged to submit remedial measures to terminate its anti-competitive behaviours and ensure fair competition within six months and must continue to present compliance measures and annual reports for five years. 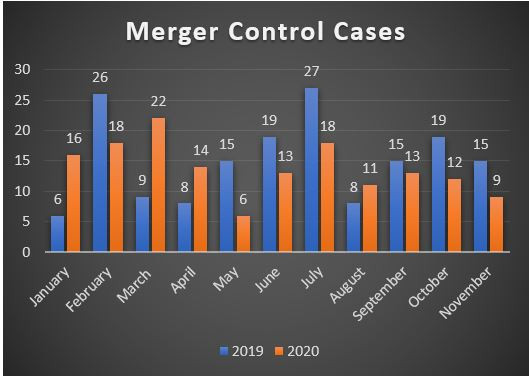 In November the general downward trend of recent months in the number of merger control cases in Turkey continued, aided by the fact that the number of cases brought each month during the year has mostly been below those brought in 2019. Despite the downturn, the TCA approved the following merger control filings in November at the Phase I stage:

, and Ceren Ceyhan, Associate, at .