November 2020 – In October, the Turkish Competition Authority (“TCA”) announced two important new regulations. One contains guidelines regarding on-site inspections and the examination of digital data. In a nutshell, the TCA has indicated that it is entitled to examine all types of data within documents stored on electronic devices, including personal mobile phones, during on-site inspections and/or to copy such data and bring it to the TCA’s premises for examination. We analyse the guidelines in detail here.

Another important TCA announcement is the draft De Minimis Communiqué determining conditions of the de-minimis doctrine under Turkish Competition law. For more detailed information regarding the draft Communique, please read our article. There is no doubt that the de-minimis doctrine will have a significant effect on Turkish competition law, as the application of the de minimis rule set under the draft Communiqué is parallel to the European Commission’s de minimis notice.

Also, in October, the TCA published an announcement regarding the online oral hearing dates for five on-going investigations (including the long-awaited Google investigation) that were postponed due to the Covid-19 pandemic. This will be the first time that the TCA will hold oral hearings online.

A decision that has everything: Banks, GDPR, formal notice, FX rates, cross-border application and more

On 28 October 2020, the TCA issued a reasoned decision regarding its preliminary investigation of the banking industry in Turkey and imposed administrative monetary fines on Goldman Sachs, Citibank, ING Bank, JP Morgan, and Garanti (a subsidiary of BBVA) for not providing the requested information.

The TCA conducted a preliminary investigation in order to determine whether a total of 21 banks and financial institutions operating in Turkey and their representatives had violated Law No. 4054 on the Protection of Competition (“Law No. 4054”) regarding collusive behaviour in their deposits, credit, exchange rates, securities, bonds, stock certificates, and intermediary services. The main focus of this preliminary investigation was Turkish Lira FX rates, as the TCA seeks to determine whether there are any correlations between the declining value of the Turkish Lira and alleged collusive behaviour.

During the preliminary investigation, the TCA requested Goldman Sachs, Citibank, ING, JP Morgan, and Garanti to provide information regarding the chat-room archives of the top-twenty traders that are trading with Turkish Lira.

The undertakings initially argued that these requests for information should be addressed to their parent companies, as they do not possess the chat-room conversation data of the FX traders outside Turkey. Secondly, the undertakings indicated that the information requested is subject to GDPR and other local laws and regulations on personal data protection and banking in various countries. In this respect, they demanded an additional period to clarify whether the collection of such information and documents complies with the local laws.

The TCA evaluated by citing ICI v. Commission[1] that a legal notice can be made to local subsidiaries and that it is the undertakings’ duty to act diligently and to inform their parent companies about the request for information.

With regards to the GDPR-related defence, the TCA indicated that the undertakings should not be put in a position to choose between obeying the rules of two different sovereign states and thus may not be held liable for an action in Turkey if such action constitutes a breach in other jurisdictions. In this regard, the TCA indicated that GDPR has various exemptions related to the transfer of data to foreign countries (i.e., Article 49 of the GDPR). Moreover, the TCA also indicated that personal data can be anonymised, as was done by other undertakings subject to the same information request (Deutsche Bank, HSBC and TEB, a subsidiary of BNP Paribas). Therefore, the TCA concluded that Goldman Sachs, Citibank, ING Bank, JP Morgan, and Garanti failed to provide the requested information and imposed an administrative monetary fine of 0.1% of each undertaking’s Turkish turnover.

Our detailed assessment of this important decision can be found here. 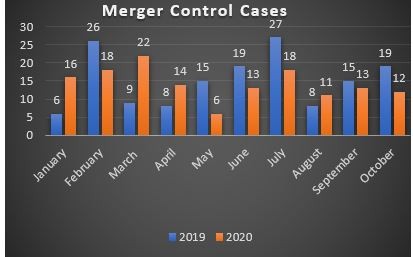 In October the TCA granted approval to the following merger control filings at the Phase I stage: