September 2020 – Turkish merger control activities in August continued the momentum gained in previous months. Merger control activity was higher compared to August 2019. As we have previously announced the oral hearings for the on-going investigations had been postponed for an in definite period by the Turkish Competition Authority (the “TCA”) due to global pandemic. This had crippled the ability of the TCA to take final decisions on these investigations. Now the TCA is looking into the possibilities of conducting the oral hearings via an online platform.

In August, the TCA—which three months ago launched an investigation into German automotive giants Audi, Porsche, Volkswagen, Mercedes-Benz and BMW—initiated an investigation against other players in the Turkish automobile industry.

The TCA, which at the end of June carried out dawn raids at automotive and leasing companies due to rapid increases in the prices of new and second-hand cars, launched an investigation against several companies in the industry including Doğuş Otomotiv, Tofaş and Ford—the main producers and distributors of automobiles in Turkey. In the statement made to the Public Disclosure Platform from these three listed companies, "In order to determine whether the distributors and car rental companies operating in the new and second-hand vehicle sales markets have violated Article 4 of Law No. 4054 on the Protection of Competition (“Turkish Competition Law”), investigative studies have been initiated by the TCA within the scope of the decision taken to initiate investigations against many companies in the sector, including our company.”[1]

The main reason behind this investigation is thought to be skyrocketing car prices after the expansion of credit by Turkish public banks in June. The prices of second-hand automobile was increased on average around 35% since the beginning of the year despite the pandemic. 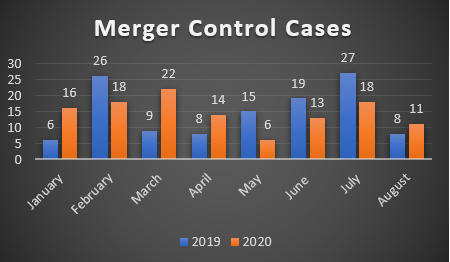 Insurance Goliath: Merger of all government owned insurance companies into one

Another significant development in the Turkish competition landscape involves public insurance companies. As they have been placed under the Turkish Wealth Fund (an umbrella fund for nearly all government-owned companies) and their merger process under a single company has been on-going unabated [2], the TCA announced that the Non-Life Insurance Bancassurance Agreement signed by Güneş Sigorta A.Ş. and Türkiye Vakıflar Bankası T.A.O., and the Life and Pension Bancassurance Agreement signed by Vakıf Emeklilik ve Hayat A.Ş. and Türkiye Vakıflar Bankası T.A.O. have received negative clearance, as these agreements do not qualify as an anti-competitive agreement between undertakings within the scope of Article 4 of Turkish Competition Law. [3]

The TCA approved the following merger control filings in August at the Phase I stage:

, and Ceren Ceyhan, Associate, at .